BWI Eagle was established in March 1988 in Butler, Pa. by several individuals having manufacturing and marketing experience with electronic devices used primarily on conveyors in the coal mining industry. A corporation was formed to capitalize upon newly available technology the founders believed could be used to develop an improved conveyor-belt speed switch that would increase safety and productivity in coal mines. The speed switches utilized a non-contacting sensor that “watched“ conveyors like an eagle, and so the devices were branded Eagle Conveyor Belt Speed Switches.

In order to get the Company up and running quickly, the founders entered into a partnership with another Butler-based company, Butler Winding, Inc., a manufacturer of transformers. In exchange for providing working capital and other resources for the fledgling Eagle upstart, Butler Winding Inc. (BWI) acquired partial ownership in Eagle, hence the name became BWI Eagle.

Both companies prospered and grew, but after several years of sharing the same facility it became evident that each company needed more space, which just wasn’t available on that site. In July 1992, BWI Eagle moved to US Highway 422 just outside the City of Butler. Shortly afterwards, BWI Eagle bought Butler Winding’s ownership, but decided not to change the name which, by then, had become highly recognized and respected throughout the mining industry.

Continual growth in the company led us to our current facility, located in an industrial park on Bonnie Drive in Butler. This beautiful 10,000 square foot building has allowed us to increase our employee base thus providing greater productivity. With more space available for the future, we can continue to grow as needed. Currently BWI Eagle employs 13 people. We are proud to say that most of our valued employees have been with us since the company’s conception, and our newest additions are committed to a long career with BWI Eagle.

Our long term goals include the continual development of wireless industrial controls, expanding our markets through advertising and word of mouth, working closely with our existing customers and welcoming new!

Looking for your manual?

American Made
All our products are made right here in Butler, PA, USA. 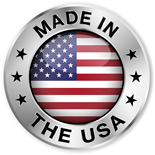 At BWI Eagle, our industrial remote controls, conveyor speed switches, prox. sensors, and other electronic specialty items are designed, assembled, programmed, and shipped from right here at our headquarters in Butler, Pennsylvania.

Why is that important? If you need support, we're right here! Just pick up the phone and call us. You can talk directly to the technical advisor who spec'd your system, the engineer who designed it, or the programmer who configured it. You will get the answers you need because we're all working together to make sure you get the best support possible.

Originally developed for our partners in the appregate industry, our ON/OFF/SPEED Control systems are now avaiable for use anywhere you need wireless control of any industrial motor. 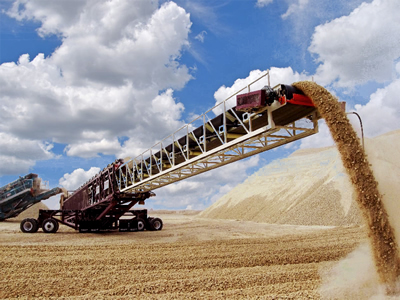 Our Variable Frequency Drive control system not only turns a motor on and off, but also precisely controls the motor's speed. We give your loader/operator easy control of your equipment with a simple, convenient, hand-held transmitter.

This system is designed to provide wireless on/off and speed control of equipment from distances up to 2,500 feet away! 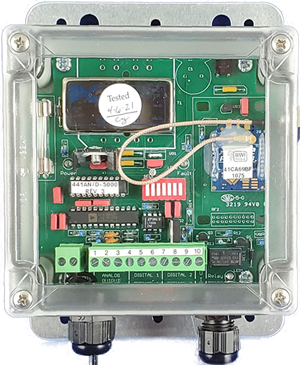 The receiving unit uses a combination of a dry contact relay output and a 4-20mA analog output. The relay latches on and off to power the motor while the analog output increases and decreases to provide variable speed control of the motor. User selectable frequencies allow multiple systems to be used in the same area with no interference.

The On/Off operation allows for easy stops and restarts while "remembering" the last speed setting. 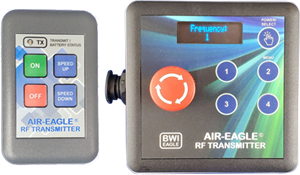 The compact handheld unit with custom button labeling features a simple 4-button design that fits in the palm of your hand. It's as easy as it looks! On, Off, Speed Up, Speed Down. It includes a clip for attaching to your belt or to the visor of your work truck. An LED indicator allows the user to easily see the speed setting in one of 6 ranges: 0%, 1-25%, 26-50%, 51-75%, 76-99%, or 100% of max speed. This transmitter is powered by two AA batteries.

The Handheld Mini-Stop style transmitter provides a true reading of the exact speed of the motor as a percentage of max speed, displayed in 1% increments on a bright, easy to read, LED display. The Mini-Stop unit is powered by a rechargeable lithium ion battery. Using the integrated USB charging port and a standard micro USB cable, this unit can be charged anywhere you charge your phone.

Like all of our products, our On/Off/Speed Control system is industrial grade. It was designed with the harsh environment of aggregate yards in mind, but this technology can be used to control motors in any industrial setting.